Recently, I've been attempting to wittle my way down a bit since I have been stretched all over the internet since 2006. I've been in so many groups and on so many pages and social sights that I cannot focus at times. No offense to them at all but it's hard to handle and you have to sometimes sort things out.  At one time, I was known to have one of the biggest Christian Groups online but I didn't know how to handle it and lost all of my contacts and members through arguments, falling outs, and whatever. I miss it but God moved me on.

I hate to admit it but I've been ordained a million times over online (and never paid once for them.) Well, not exactly a million but let's put it this way…..many times. The string of ordinations began after my original Pastor, Pastor Walter Cherry, Sr ordained me in the Church of God in Houston, Pa. He passed and I went to Bible School so that I could learn what I needed to know to run the church right that was left to me after our Pastors passing. Then, the Pastors of the Bible Institute ordained me (again), with me not understanding exactly why I needed another one but I took it anyway. Blessings don't hurt right? I think that it was because of the status that our little hurting church was in. They wanted to do it publicly so that all can see. It was in the Newspapers as well.
A few years later, our little church got flooded out twice by Hurricane Ivan and we had to give it up so I took my ministry and our 501(c)(3) online which turned out very good after a few years of Trolls and just plain old mean people, God's Grace kept me. The Lord strengthened me and for that I am thankful.
My recent experience was a learning experience. About a week ago, I emailed an online Pastor and asked if he could remove me from his ministry. I wasn't spending enough time in his ministry and he is doing very well. I didn't want to take up any more of their time and room online and not be able to do anything for them. (His online ministry.) I like to give 100% or none.  He emailed me back to make sure that it was what I truly wanted and I reiterated it with an email saying that it was. They are very nice people but I just ran out of time to serve with them. Here I sit, waiting to get a letter from them, saying their goodbye's. I got fooled. They not only sent me a Letter of Recommendation but they sent a Letter of Good Standing, along with my Ordination Credentials stating that I've been an ordained Minister with them since 2007, with their seal on the letter and my membership number.
I have learned from this situation to just accept blessings from now on, sit down, enjoy what God gives me and learn to receive.  With my hands tied behind my back I cry, "UNCLE!" (If anyone remembers that childhood game.) I give up. From now on, I just want to sit back and watch God do His work. God bless UCFM. Please see the attachment if it comes to this post that way. I am not sure how these blogs post additions and attachments.) God bless.
God is good. ~ Essie 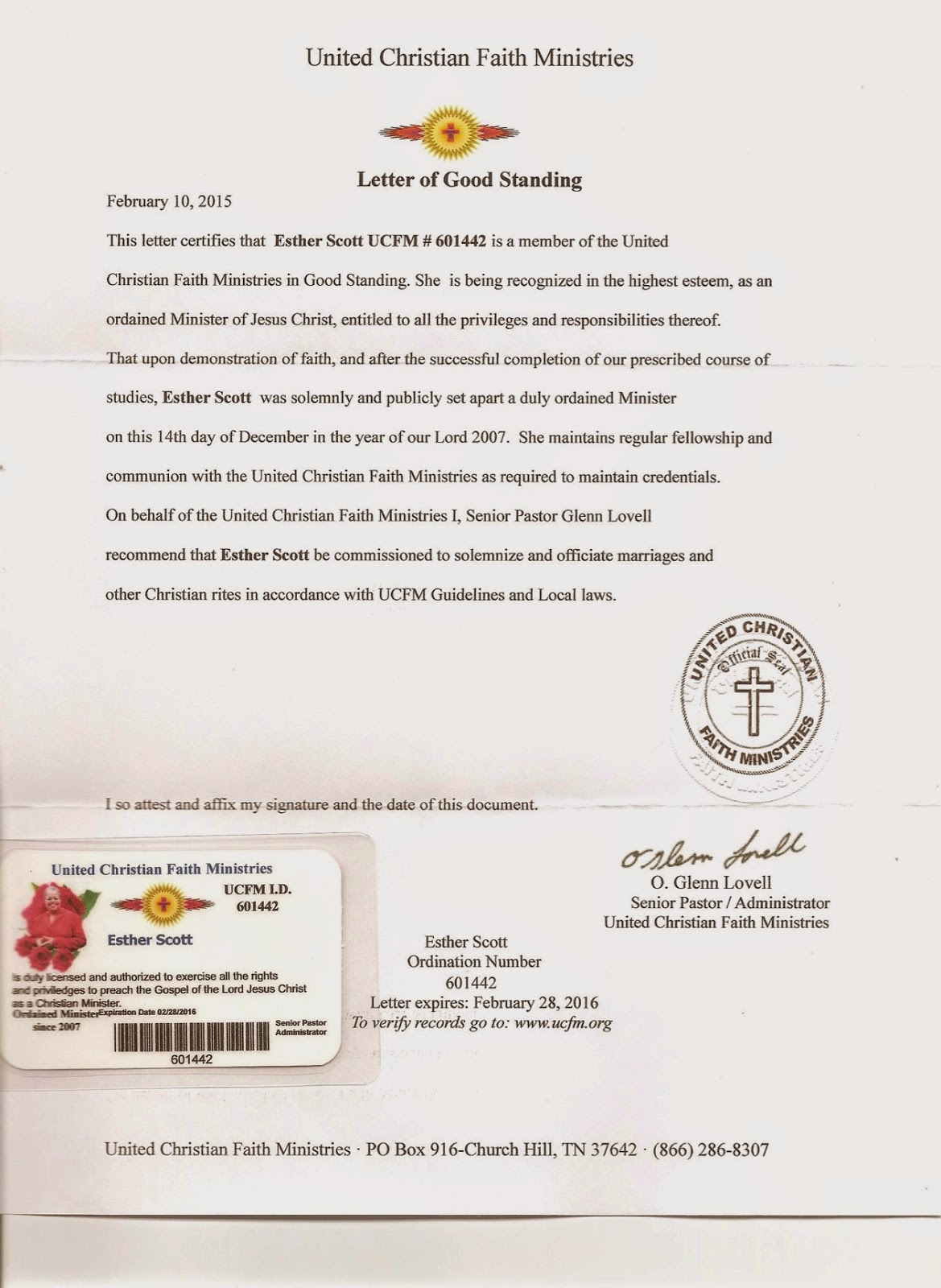 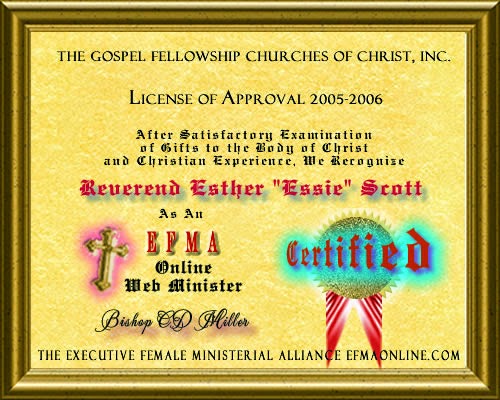