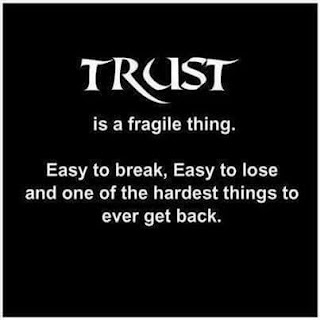 Never trust again? That’s timidity and fear. I feel the opposite.
ESTHER R. SCOTT·THURSDAY, DECEMBER 3, 2015
A friend of mine posted something about Trust. It said “Trust is a fragile thing. Easy to break, easy to lose and one of the hardest things to ever get back.” Note the word ‘fragile’. The word denotes a type of weakness and fear. At first I saw the post as good but the Word tells us differently about it. Due to the Awesome Grace of our Most High God we now live in a season where we cannot afford to leave anyone behind. We live in a selfish society and if things don’t go our way, we are quick to ‘diss’ someone and leave them in the battle field and kill their character over our hurt feelings. That’s not a good soldier. (I speak spiritually as well.) If you think of most of the people that you know who refuse to forgive, they are bitter and hurt people. The old addage goes, “Hurt people, hurt people.” When someone is hurt and unforgiving, they tend to hurt others in retaliation. They end up bitter and lonely. No man is an island and no man stands alone. I once knew a man who hated his grandmother so badly that he said, (in church mind you,) “If she dies she is saving God’s good air.” Wow. Good Christian right? Out of frustration, she had been telling others about his inconsistencies around the house where they lived and instead of remedying the situation, he wished death upon her. Much sooner than later, she died. Here’s one thing I know for sure:
Jesus would continue to try and not give up. That one sheep left the 100 but the Good Shepherd left the 99 to go get him. And that may not have just been a one-time occasion! If you suffer from trust issues, know this, it hurts those who have been trying to reach out to you. You aren’t perfect either. None of us are. Someone stated once, “Treat them with a long-handled spoon” and we’ve been abusing that statement ever since....just because it ‘sounded’ great at the moment. I say, “Share the spoon and both can eat crow and repent.” Some have treated people with a long-handled spoon when in all actuality, they were the problem. There are 2 sides to every story. It’s time to forgive and kick the devil in his teeth. Ijs.
Essie