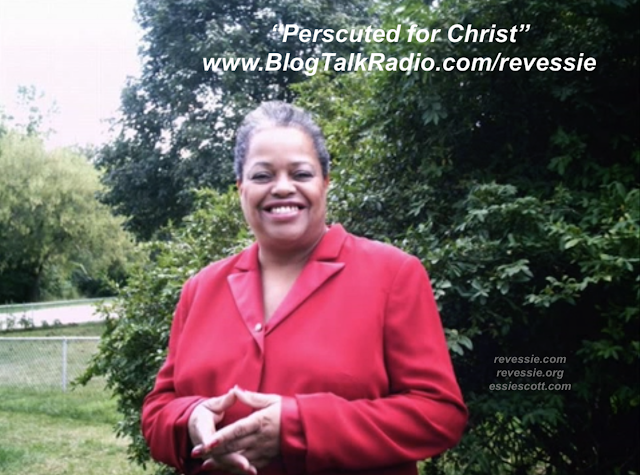 Good Morning Saints and if you aren’t one, consider becoming one so that you can live free, covered by the Redemptive Blood of Jesus. Amen.

I pray that your day is going well and blessed and if it doesn’t seem to be Bless it yourself! You have the Most High God within you. He gave His Power to you to use so use it! Hallelujah!

Today I will be speaking on “Persecuted for Christ” So grab your pen and notebook or tablet, your drink and your snack and sit back and listen, and I will discuss this right after our Invocation of God’s Ruach HaKodesh, His Holy Spirit.

Just as the phrase was stated in the book of Esther "For such a time as this" I am stating the same to all of my friends and believers of Jesus Christ that, things are happening in the spiritual which you may be feeling in the natural that are only a sign to prepare for such a time as this. Persecution among the saints has Amplified. Some are caught off guard and are unusually shocked when things happen out of the ordinary to them. Peter tells us plainly not to be surprised when outrageous and untimely attacks come our way. We must remember that Jesus said that Satan walks about as a roaring lion. 1 Peter 5:8. He didn't say that he was one but gives the appearance in our lives as being one. Years ago I watched a family movie called face the tiger about a young boy who was being bullied and he ran away at every chance, living his life in fear. An old Chinese man told him about a little boy who was constantly being chased by Tiger. It made his life miserable. His sensei told the little boy, "face the Tiger." One day as the little boy in the man’s story was coming home from school the tiger ran up to him. With his little heart pounding he turned around and faced the Tiger and the tiger ran away from him. The little boy who heard the story got victory over all of his fears and faced the bullies and they no longer chased him or bothered him when they saw his courage. And this is what the devil does to us, he does everything he can to try to put fear into our hearts but when he sees your courage. And who is our courage? Jesus. When he sees the Jesus in you, He will run. Ladies and gentlemen we are an example of that little boy. I am telling you today to turn around drop your inhibitions and face your fears head on, let them know that you are no longer afraid of them. The word says be bold be strong for the Lord thy God is with you.
Php 1:14  And many of the brethren in the Lord, waxing confident by my bonds, are much more bold to speak the word without fear. (This is what God wants us to do or it wouldn't have been in His book, in His direction pamphlet.)
1Th 2:2  But even after that we had suffered before, and were shamefully entreated, as ye know, at Philippi, we were bold in our God to speak unto you the gospel of God with much contention.

Rev 20:4  And I saw thrones, and they sat upon them, and judgment was given unto them: and I saw the souls of them that were beheaded for the witness of Jesus, and for the word of God, and which had not worshipped the beast, neither his image, neither had received his mark upon their foreheads, or in their hands; and they lived and reigned with Christ a thousand years.
Rev 20:5  But the rest of the dead lived not again until the thousand years were finished. This is the first resurrection.
Rev 20:6  Blessed and holy is he that hath part in the first resurrection: on such the second death hath no power, but they shall be priests of God and of Christ, and shall reign with him a thousand years.

The Defeat of Satan
Rev 20:7  And when the thousand years are expired, Satan shall be loosed out of his prison,
Rev 20:8  And shall go out to deceive the nations which are in the four quarters of the earth, Gog and Magog, to gather them together to battle: the number of whom is as the sand of the sea.

I believe that gog and Magog battle is happening right now so we have to get ready. The countries are gathering together to fight one another. Pray for your loved ones now not later. We never know when we are going to be caught up with Jesus. Whether you are pre trib, mid trib or post trib, just be saved. Pray that God opens your loved ones spiritual eyes and gives them that Damascus Road experience. Saul who hated Christians turned to the Apostle Paul when his eyes were opened. And he then wrote most of the books of the New Testament too. He was so sure of his salvation that he told people to follow him as he followed Christ. That's a strong statement. Check out how Paul was persecuted in 2nd Cor 11:23. (Paul’s resume’.)
Are they ministers of Christ? (I speak as a fool) I am more in labor's more abundant, in stripes above measure, in prisons more frequent, in deaths oft. Of the Jews five times received I forty stripes save one. Thrice was I beaten with rods. Once I was stoned, thrice I suffered shipwreck. A night and a day I have been in the deep; In journeyings often, in perils of waters, in perils of robbers, in perils of mine own countrymen, (I concur with Paul here,) I. Perils by the heathen, in perils in the city, in perils in the wilderness, in bbn perils in the sea, in perils among false brethren, (let's also cover that as we. Shall we?) In weariness and painfulness, in watching often, in hunger and thirst, in tastings often in cold and nakedness. Beside those things that are without, that which cometh upon me daily, the carry of all the churches. While one is weak and I am not weak? Who is offended and I am not offended? If I must needs glory I will glory in the things which concern mine infirmities. The God and Father of our Lord Jesus Christ, which is blessed forever more knows that I lie not. I Damascus the governor under Aretas the king kept the city of the Damascenes with a garrison, desirous to apprehend me. And through a window in a basket was I was let down by the wall, and escaped his hands.
That is the Apostle Paul's resume'. What is yours? What have you been through for Christ. Last Sunday I talked about the left or the right hand of God. Are you on the left hand of God or the right hand? Are we always asking Him for something and always wanting something from Him or do we joyfully go through trials and tests and persecutions because we love the Son of God. Where do you stand? Whose side are you on? We're in a battle we are in a war folks and it's only going to get worse. Don't be like the silly virgins, be prepared so when the Bridegroom comes you will be ready. Be prepared. Sit, rest in the right sycamore tree. Sit down and sup with Jesus. Rest, talk to Him, Don't be a dried up fig tree. Jesus cursed the fig tree and the next morning it was gone.

Talking about divine favor! God wanted to make sure that Paul got the Word out just as He is making sure that we are doing the same. Woah to those ministers in title only who are afraid to speak up for others in the body of Christ! Woah to those who stand back to see how our plight, which is actually persecution, will "turn out." Sampson would knock the beams down around them. David would sling a rock in their forehead and Debra and Barack would devour them in battle. The great thing about this is that we as Christians today don't have to do all of that. We have Jesus! He does the heavy work. Don't talk more about a situation to your friends and family members more than you talk to Jesus about it, amen?
Yes I am going through persecution but I am going to be honest with you, I don't want to go too far and say, "It was great!" It's not great but it IS a sign that I did SOMETHING good for God. If I wasn't a threat to the enemy then I am not successful for the Kingdom of God. When you become a threat to the enemy, then you now you've been, or are being successful for the Kingdom of Heaven. Amen. So...

1Pe 4:12  Beloved, think it not strange concerning the fiery trial which is to try you, as though some strange thing happened unto you:


1Pe 4:13  But rejoice, inasmuch as ye are partakers of Christ's sufferings; that, when his glory shall be revealed, ye may be glad also with exceeding joy.

Are you saved?
Are you saved?
If you are not just repeat the Romans Road after me: Say “Jesus, I repent of my sins, I am so sorry Lord. I believe that you died on the cross and rose 3 days later from the dead, just for me and I accept what you have done, I accept you as my Savior. Thank you Jesus, amen.” Now go find a bible believing, Holy Ghost filled church and learn of Him, it’s never too late. Your new life starts now. All old things are gone away. God throws them as far as the East if from the West. Now….go live, laugh and love!
Thank you for coming on today and I pray that your week goes by Victoriously!