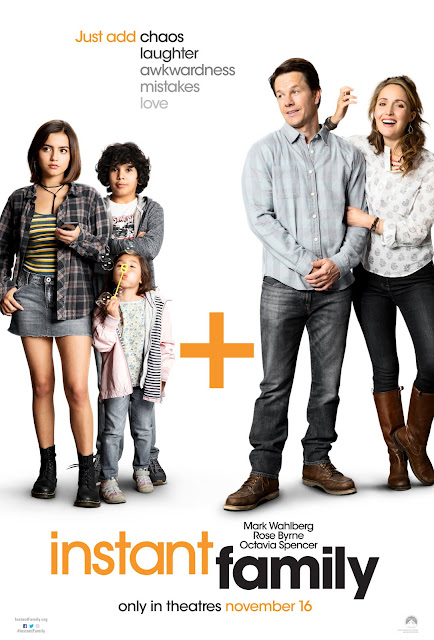 I  just watched a wonderful movie called, "Instant Family" that starred one of the Walberg brothers. I want to say Donnie but I am not sure. Wait, it was Mark now that I looked it up. (They are both so awesome regardless.) That movie was about adoption. I was in tears half way through the movie. It was outstanding. Whoever wrote this movie deserves an award. It was so well written. I am a product of adoption and my life wasn't a bag of cotton candy. I went from home to home hoping to find someone who would just love me for me and not call me "odd" or "crazy" or the preverbal "fast." If it weren't for the Veterans Check that I was getting at the time I don't think half of them would want to be bothered. I won't get on the one who made me stay in an actual doghouse when she got drunk and hated on me. Strange thing though, when I got older, she would called me to go get beer for her at the local beer distributer. She'd hand me a big bill and tell me to keep the change. I found that odd. It was about 30 years later then from when I was a kid living with her. She called one day and asked me to tear down the dog house that she had outside her house and....I did. I felt sorry for her. She was an old(er) drunk and something just seemed amiss with her. I heard she had cancer. And sure enough, I went over to her house in my little orange Toyota and torn down the exact dog house that she used to put me in. Fathom that, I tore down my own prison. And I wasn't hateful about it. She finally died...of cancer nonetheless.

Life can get wierd sometimes but to be successful you have to learn how to have patience and not hold a grudge. Back to the movie....Mark's character and his wife had a somewhat rough time with the 3 kids that they adopted but it turned out so beautiful. I don't want to give it away. You just have to see the movie.

Be thankful that you are living and breathing right now. God brought us all a mighty long way.