David is praying for divine protection while he is fleeing from his son Absalom who wanted to kill him and take his place as king of Israel.

Verse 1 - Lord how are they increased that trouble me! Many are they that rise up against me.
This verse speaks of worldly hosts gathering against him.The Midianites and the Amalekites You know, our enemies, (we all have them.)

Verse 2 - Many there be which say of my soul there is no help for him in God. Selah.
Our souls enemies do not fear or believe in God therefore they cannot, due to spiritual blindness. They actually fear your victory that is coming but they don't see what you see. That is why our enemies continue to badger us and sometimes it's family.
a.  Your eyes are blinded by this world, and worldly lusts and they simply do not believe And they call us foolish for believing And they say "there is no hope in God!"

Verse 3 - David still glorifies the Lord and exalts him stating that He is the glory and the lifter of his head.
a. Glorify God through your troubles and pain. Praise him anyhow.
b. Never dwell in sorrow and beware of pity parties and an over abundance of tears          which can lead to depression. Dwell only in the Lord.
c. God is a shield for us he is our protection.  When you have Auto insurance you are not terrified to drive.When you have homeowners or fire insurance you're covered.

Verse 4 - If you want to cry cry to God. People tend to take advantage of the crier. They think that you are weak and some people cry as a form of manipulation as well. It's sets people to defense mode even while consoling or hugging the crier. If you cry too much people will not want to see you coming. In my case I usually cry when I'm angry or upset. When you see me crying get out of the way. Let's give it to God instead. Prayer is heard and in that way people won't misconstrue you.

Verse 5 - Praying to the Lord gives you sweet sleep.
a. Do you wake up at all hours of the night? Just pray! You will sleep better. And sometimes God wakes you up in the middle of the night because you're too busy during the day. God is trying to contact you. People have been known to wake up every night at 3:33. I have experienced that myself. Jesus and the disciples were allegedly in the ships in the sea during this time. Scholars say that this is a time where spiritual activity goes from negative to positive. Evil reigns at night until Jesus comes around and starts 'fishing.'

Psa 91:5  Thou shalt not be afraid for the terror by night; nor for the arrow that flieth by day;

There many times in the Bible where he contacted people in their sleep and  gave them direction. As soon as I wake up in the morning I thank God for new day and I pray and I bless Him. I say "Baruch Atah Adonai!" It just feels so good and makes my day go well.
b. The Lord sustains us and in our sleep he surrounds us. He preserves us and keeps us from harm. That is certainly something to thank him for. I watched a video by an ex-Satanist and he was extremely powerful in his New York community. He did spells on people and killed people. He kept doing a death spell on a lady and she never died! satan told him to leave her alone because she prayed and love Jesus. See? She had insurance! She was covered! This reminds me of when the apostle Paul got bitten by snake and everybody sat around waiting for him to die and he didn't. Your enemies will be waiting for you to die because of the spells and curses that they sent your way. Little do they realize the word says "no weapon formed against us shall prosper and all the rises up against shall fall.
c. Acts 28:3 , 3:6, As I said above, this is the text where people were waiting for the apostle Paul to die after he got bitten by a snake as they sat by the fire. He looked at them as though to say "What? What?" They were perplexed. Paul never died. Your enemies have been waiting for you to die too. You'd be surprised who is waiting for your demise. In David's case it was his own son. People can put spiritual contracts out on others for fame and for fortune. In the entertainment industry it's been known to happen.

Verse 6 - You will have an unusual supernatural fearlessness. We can all use that right?
a. Total confidence in God. Your car acting up? So! Is the landlord selling your house? So! Are health issues trying to come on you? So! Are you and your family under attack? So! Are you experiencing job threats? So! There are more jobs you know. God may give you a tax-free work at home business.

Verse 7 - Ask God to arise in your situations to save you. Stir up your spirit. God will break the teeth out of that lion like the abominable snowman on Rudolph the red nose reindeer. That's what satan is you know, a toothless lion. All bark and no bite just like the abominable snowman. Some of those weird thoughts that we get sometimes, it is the enemy trying to plant fear in us. Do not take out any time to contemplate on that stuff. Take those thoughts captive.

Verse 8 - Only God saves he is the blessing. 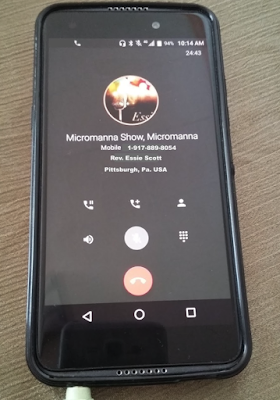