Looking for dream interpreters out there! 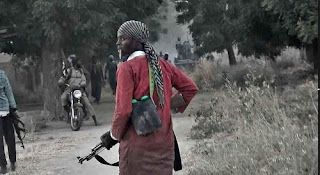 Last night I had dreams that were a bit disturbing. Men were in the streets of the town in which I once lived, and they were killing all of the people of that town. I saw people falling down at the sides of these 'enemies' and it was terrible. The background of the entire dream was grayish in color. Most of the time, when I have dreams I cannot tell if I am there or if I am being allowed to see this activity. I always feel like 'someone' is with me in my dreams but I can never see who it is. They say that this is your angel keeping you safe while dreaming.

In one part of the dream I remember driving some type of vehicle to get away from them and my daughter was standing in the vehicle with bullets whizzing by her head. I told her to sit down so that she wouldn't get shot. The vehicle began to act up so we got out and ran. As we stopped to rest, I told my children (son and daughter) that we would have to go to our house to attempt to lock it up and leave because I felt somehow that these murderers would definitely go to our house as well. There was not a house on the street that was safe from these men. They were killing people and just standing there smiling about it and laughing. We ran home, locked it up and ran away again. As we ran, running to the North seemed clearer and safer, and running to the West seemed clearer and safer as well. After a moment we decided to go back home to check it and sure enough, the enemies had been to our house. They did no harm to it but we noticed that our guns were gone. They stole our guns.

There was destruction everywhere. No one was safe from this devastation that these 'people' were doing. I believe that these people could have also been a condition of some sort such as a disease or government ruling or law to affect everyone in it. Whatever it stood for it destroyed the people. The Word says:


2Ch 7:14  If my people, which are called by my name, shall humble themselves, and pray, and seek my face, and turn from their wicked ways; then will I hear from heaven, and will forgive their sin, and will heal their land.

We need to pray more people.

We ran west to an old town that we used to live in where there is a small college. The building that I used to live in was called, "Liberty." At "Liberty" we were safe. The first floor and office was filled and busy with people. I saw two old friends there as well. One a younger cousin and the other an old high school friend of mine.

I believe that something is coming soon to the Body of Christ to test us. Something huge. It may be either governmental or some type of uprising, a division among the people somehow. I also saw a woman with a huge, somewhat clear plastic bag with the bottom filled with an unusual type of spherically-formed marijuana. It varied in color but was shaped oddly. She said, "Have you ever seen such a huge bag of marijuana? When I used to get it-it was smaller!" One of the pieces was shaped like a miniature cornucopia and it was dark in color. As people argue over whether or not marijuana should be legalized, as Christians, let us continue to realize that God did not make our lungs to take in smoke. That's why we coughed so badly when we were teenagers, trying our first cigarette. Jesus didn't smoke. There is no scripture in the bible that says that He did. He was our example. Marijuana is very different from the old-time college marijuana. It has a lot of additives today and most of them are not healthy and can possibly kill a person.

If anyone has an interpretation of this dream please comment on this post? You are welcome to do so. I will be typing my dreams here as well at times.

"Jesus walks with me." (On Kanye West)

(Personal so hang in there with me:)

My son, who hasn't been in church for a long time and somewhat lost his faith, did something today that made me cheese like a chessy cat. I am talking about a young man who once danced in the Spirit under T.D. Jakes anointing in Monroeville, Pa. USA when he was around 5 years old. I thought he was making fun of the man of God and I told him to stop. My daughter said, "Mommy, he's not making fun of him, he is really lit with the Spirit, look!" I looked and that young fella was dancing like David. It made me happy.

He sent me a video today of Kanye West which threw me because I didn't think that my son was still interested in Jesus. He does believe in God but he lost faith in Jesus. It comes from bad company and young people trying to keep up with the entertainment industry and so forth. Some of you parents may have gone or are going through this. Let me edify and encourage you.....they do come back, keep praying.

I watched both videos that he sent me and had a great time in the Spirit watching Kanye. I believe in Kanye and I do believe that he has something going on for the Kingdom of God that our so-called 'spiritual entertainers' SHOULD HAVE been doing. While they are cheesing for the camera, half-dressed, showing their breasts and legs, with the men in skinny pants and pink lipstick and doing just about anything for recognition, Kanye is leading young people to Spiritual Praise and Worship and they sound like angels.

The main thing that I noticed is that Kanye lifts up the name of Jesus plainly and lovingly. He is not making songs that 'fit both worlds' and attracts both sides of the spectrum. That young man is praising and worshipping our Lord. You'd have to be deaf, dumb and blind to miss that.

As far as #Yesus is concerned, now that I've watched his recent activities, I believe that Kanye was misunderstood on his Yesus album too. Think about it, Israel didn't have "J's." They used "Y's." Now I am not sure if Kanye was calling himself Yesus then but he was on a roll and at the very start of his eye-opening experience just like Saul/Paul. He had his Road to Damascus experience. Saul killed Christians! Did you know that?

I believe that the death of Kanye's mother was a horrible event. There were rumors that she was an Illuminati hit and they say that he allegedly sold her out for fame. We'll never know. He was famous before her death. It's between him and God. I don't believe he did something like to that his beloved mother at all. All that I know is that young man has repented of his sins, whatever they were, and he is blessing God more than some of us so we have to get with the program and stop dogging him. My daughter and I watched his videos today, via my son's leading, and we felt happier than we have in some of the churches that we've been in. Kanye's choir sounded like angels. Dead churches bore me. I have to feel the spirit. Jesus first, then your tithes ok? ♥️ Said in love of course. 🧡


There has been so many errors in the Christian faith that folks, we are losing the young people, but God....  they are coming back. I see it slowly taking place and for that I am glad.

For my son to send me videos of Kanye West talking about the bible and Jesus, something has happened in his life. I feel this way and this is why I am posting this post, if people turn back to God and Jesus via Kanye West, that is a total blessing. Kanye converted to Christ, who are we to say that he hasn't? He said that he did and he glorifies Jesus boldly. Actually he does it on a greater scale than I do and I've been 'preaching' for over 25 years now in the pulpit. Who am I to say that Kanye is fake? Yes, the bible says that we are to judge but no one can judge who is of the wheat or the tare.


The Parable of the Weeds
Mat 13:24  Another parable put he forth unto them, saying, The kingdom of heaven is likened unto a man which sowed good seed in his field:
Mat 13:25  But while men slept, his enemy came and sowed tares among the wheat, and went his way.
Mat 13:26  But when the blade was sprung up, and brought forth fruit, then appeared the tares also.
Mat 13:27  So the servants of the householder came and said unto him, Sir, didst not thou sow good seed in thy field? from whence then hath it tares?
Mat 13:28  He said unto them, An enemy hath done this. The servants said unto him, Wilt thou then that we go and gather them up?
Mat 13:29  But he said, Nay; lest while ye gather up the tares, ye root up also the wheat with them.


Mat 13:30  Let both grow together until the harvest: and in the time of harvest I will say to the reapers, Gather ye together first the tares, and bind them in bundles to burn them: but gather the wheat into my barn.

That's my take on Kanye West. God bless the man and his household. In Jesus name. Amen.