My thoughts on Easter.

6 mins ·
This is an excellent time of the year in which humans celebrate love, peace, joy, bright colors, good food, the "Word", and laughter. I am writing this post in response to those religious minds who relentlessly stick to "Ishtar", eggs, and bunnies. We understand that the Lord told us to pull people out of the fire but there is a way to do it without offending people. I do not believe in my heart that our loving God will put anyone in hell over eggs and bunnies. A sin is a sin. There is none greater than the other. Some have sinned in ignorance. In the Old Testament, there was a sacrifice for the sin of ignorance. If they did it then, Jesus' sacrifice should be even better for our sins of ignorance today.
Leviticus 4:0-3
Leviticus 4
1 And the Lord spake unto Moses, saying,
2 Speak unto the children of Israel, saying, If a soul shall sin through ignorance against any of the commandments of the Lord concerning things which ought not to be done, and shall do against any of them:
3 If the priest that is anointed do sin according to the sin of the people; then let him bring for his sin, which he hath sinned, a young bullock without blemish unto the Lord for a sin offering....
Jesus told us in the Word,
Luke 17:0-2
Luke 17
1 Then said he unto the disciples, It is impossible but that offences will come: but woe unto him, through whom they come!
2 It were better for him that a millstone were hanged about his neck, and he cast into the sea, than that he should offend one of these little ones.
Our mission is to lead people to Jesus in love, with love and through love, not crushing one's spirit with harsh, open rebuke. Correction should be made gently and kindly not bashingly or in the form of intimidation. Intimidation is an evil, controlling spirit and takes away the freedom of others. We are to tell people about Jesus Christ as he said himself in Matthew 28:18-20, we are not to condemn anyone because that is the enemy's job not ours. The Holy Spirit convicts, the enemy condemns.
➢ convict
verb | kənˈvikt | [with object]
declare (someone) to be guilty of a criminal offense by the verdict of a jury or the decision of a judge in a court of law: the thieves were convicted of the robbery | (as adjective convicted) : a convicted murderer.
➢ condemn | kənˈdem |
verb [with object]
1 express complete disapproval of, typically in public; censure: fair-minded people declined to condemn her on mere suspicion.
With this post I am not trying to offend anyone who does post like that because many do it out of caring for others and not meanness. That I understand. And yes, I do believe that people should know the truth so that it can set them free but, it should not be used as an anvil on the top of the non-believers or uninformed heads. And I end my thought with the following post which is an example of God's wonderful Grace:
Colossians 2:8-17
8 Beware lest any man spoil you through philosophy and vain deceit, after the tradition of men, after the rudiments of the world, and not after Christ.
9 For in him dwelleth all the fulness of the Godhead bodily.
10 And ye are complete in him, which is the head of all principality and power:
11 In whom also ye are circumcised with the circumcision made without hands, in putting off the body of the sins of the flesh by the circumcision of Christ:
12 Buried with him in baptism, wherein also ye are risen with him through the faith of the operation of God, who hath raised him from the dead.
13 And you, being dead in your sins and the uncircumcision of your flesh, hath he quickened together with him, having forgiven you all trespasses;
14 Blotting out the handwriting of ordinances that was against us, which was contrary to us, and took it out of the way, nailing it to his cross;
15 And having spoiled principalities and powers, he made a shew of them openly, triumphing over them in it.
☞ ☞ ☞ 16 Let no man therefore judge you in meat, or in drink, or in respect of an holyday, or of the new moon, or of the sabbath days: ☜ ☜ ☜
17 Which are a shadow of things to come; but the body is of Christ.
Let us be reminded of Jesus' righteous indignation against such activities of which we are (hopefully) not a part of:
Matthew 23:26-31
26 Thou blind Pharisee, cleanse first that which is within the cup and platter, that the outside of them may be clean also.
27 Woe unto you, scribes and Pharisees, hypocrites! for ye are like unto whited sepulchres, which indeed appear beautiful outward, but are within full of dead men's bones, and of all uncleanness.
28 Even so ye also outwardly appear righteous unto men, but within ye are full of hypocrisy and iniquity.
29 Woe unto you, scribes and Pharisees, hypocrites! because ye build the tombs of the prophets, and garnish the sepulchres of the righteous,
30 And say, If we had been in the days of our fathers, we would not have been partakers with them in the blood of the prophets.
31 Wherefore ye be witnesses unto yourselves, that ye are the children of them which killed the prophets.


Get your free savings account here, now: www.goldladyllc.com Become a Customer or an Affiliate.
Posted by Rev. Esther R. Scott at March 31, 2018 No comments:

Tonight's prayer for our families 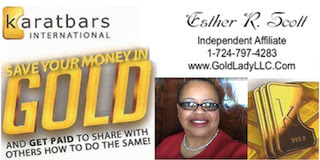 🌹 GoldLadyLLC.Com  (Free Gold Savings Account for you.)
www.Facebook.Com/RevEssie
💰 https://www.paypal.me/revessie   (PAYPAL)
To unsubscribe, please reply to this email with 'unsubscribe' in the subject line.
Posted by Rev. Esther R. Scott at August 06, 2017 No comments:

Rev. Esther R. Scott
I Am Blessed. God is my Provider. When things aren't going my way, I rest in Him.
Older Posts Home
Subscribe to: Posts (Atom)